The path of the pilgrims

This route was widely used in the past decades by the villagers in their pilgrimage to the hermitage of Sant Salvador de Son Espases, every first of august.

In this place it had existed the old castle of Son Espases, already documented from the 985 BC and that was part of the defensive line of the Old Catalunya. The hermitage was built taking advantage of part of the foundations and stones of the castle. Juan de Austria, on the way to Montserrat, visited the hermitage and left some offerings: some flags and lanterns of gold that they had captured to the Turkish Ali Bajà in the famous battle of Lepanto in 1572. These offerings were hung on the walls of the hermitage until the mid-19th century.

From the church of Sant Martí de Sorbet we take the street of Sant Martí in the direction of the station of Renfe. Along the route we will follow the red marks with a white dot, characteristics of the road Romeu from Viladecavalls to Montserrat. At the level of the station we cross the railway tracks and take the street Montserrat up. We turn left on the road Can Buxeres, a paved road which we will continue up to the line of cypress trees that decorate the entrance of Can Buxeres. Here on the right is born a track that goes down by the forest.

At the level of a tank we leave the track to take the path that goes up on the right in the direction of the hill of Can Margarit. The path ends on a track that we take to the right a few meters and that leads us to the hill. The way goes down in a steep slope up to the mas of Collcardús. To get there we will leave two tracks that run to the left. We cross the C-58 above the tunnel and cross the parking of the restaurant. At the end of the parking it is born a track that we take in the direction of Montserrat, which already stands out before us by cutting the sky with its beautiful forms. At the level of a residential area we cross the torrent of Boixadell and we pass near the houses. At the end of these houses the track is transformed into a narrow path that goes down to cross the torrent de la Torre and the highway C-58 under the viaduct.

We take the road to the left until a crossroads where we leave the asphalt. Straight ahead, the road leads to Olesa, and to the right, to Terrassa and Manresa. In the middle, it goes up a paved track with a strong slope that crosses the railway tracks over a bridge. A little more to the right is the path that leads to the station of Torreblanca, where we will come back to take the train to Viladecavalls.

Before us stands out the Coll dels Lladres, toward which we are headed up by a trail that goes to the left of the track, at the height of the closed curve. From the Coll dels Lladres we see the plain of Fideuer, where the path goes to. Shortly before arriving there, a sign that marks the passage of the old road to Olesa indicates to us that we have to take the path on the right and that rises gently up to the hill of the Pedra, where we observe a small chapel dedicated to Sant Bernat de Menton.

We cross the pass and we go down to the hill of Bran, where the path crosses a track that we take to the left for a few meters. A little further we follow the red marks with the white point and take the path on the left side of the road and that goes to the tip where it stands the hermitage of Sant Salvador de les Espases. Inside the building there are a number of rooms, some of them of private and others of public use, such as the tables, the barbecue and the small fountain which will allow us to cool off before starting the way back to the train tracks, where we will take the road on the left leads to the Renfe train station of Torreblanca, where we can take the train back to Viladecavalls. There is a train every hour.

Chapel of Sant Salvador de les Espases: It is situated on a cliff that is isolated in its point of confluence of the terms of Esparreguera, Olesa and Vacarisses. It was the old chapel of the castle of the Espases, of which there almost are no remains, and is documented from 985 BC. The current building corresponds to a remodelling of the sixteenth century. It has a single nave, of low-vault –of canon, at first- and without apse. It was completely restored in 1924 and the interior was remodelled in 1977.

From Terrassa with the General Transport Bus company of Olesa, www.tgo.net 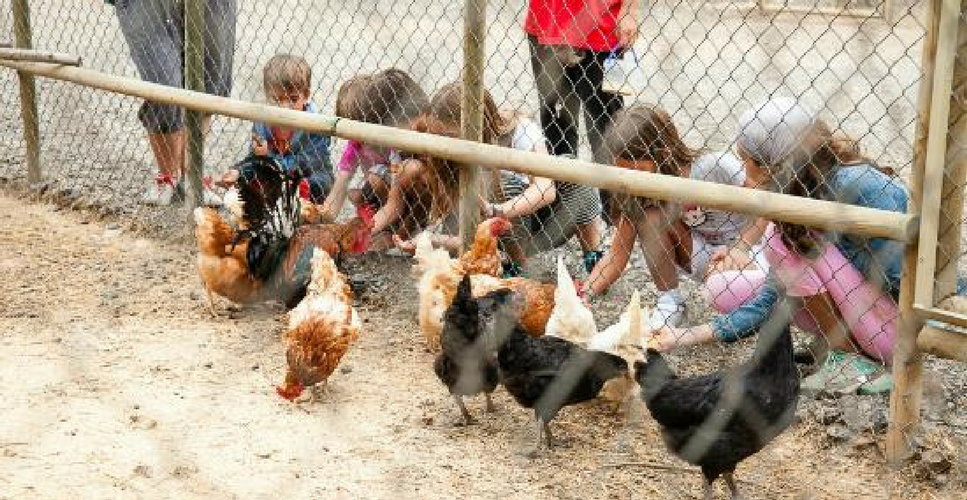 Workshop at the Granja d’Aventura Park

Farm with animals, vegetable garden, space for adventure… have a nice day with the whole family!