The way Romeu that goes from Barcelona to Montserrat was extensively used by the Xatos groups when they went in pilgrimage to the hermitage of Sant Muç. During the celebrations of the Easter of Resurrection, armed with knives, forks, spoons and gigantic grills, they come out of the church of the Hospital de la Santa Creu, in the Raval de Barcelona, where there was a chapel dedicated to the saint and they came to the chapel to celebrate the event. People from Rubí joined the procession and the paella that took place at the chapel of Sant Muç, and in the afternoon there was a dance on the village square.

The tour starts at the Castle, located in one of the oldest points of the occupation in the Iberian era of Rubí. The old castle was part of a line of defensive fortifications of the Muslim world and it was located further to the west, close to the hermitage of Sant Genis.

In 1233 the knights of Rubí built a mansion that was transformed in the castle a century later, as leaving the old fortification. The new castle was conceived as the point of defence of the term of Rubí and how as a feudal administration centre. At the end of the 14th century the civil and military jurisdiction passed into the hands of the king and the castle went on to become first a stately residence and later on a masia. In 1983 it was acquired by the municipality of Rubí, which remodelled it to adapt it to the cultural uses it has today.

We take the path up behind the castle and along the wall of an industrial plant, leaving to the left the local itinerary of nature of Sant Muç. We arrive to an esplanade where it goes down an asphalted street. We continue by the road that passes in front of the building of flats known by the name of Pich Aguilera and that brings us to the aqueduct bridge of can Claveri. It was built in 1753, due to the diversion of the torrent of Can Ramoneda, to supply water to ditches and to the mill of the castle and to allow the passage of the road that led to the hermitage of Sant Muç.

Before the bridge, on the left, a stairway allow us to go down to the crossing of streets, where we take that which rises parallel to the train tracks, which we cross by a bridge a few meters further up. This street brings us up to the masia Can Ramoneda, easily identifiable by its characteristic palm tree.

We continue to a junction where the paved road turns to the left and where we take the soil track which continues straight ahead. This stretch of the route coincides with the GR-96, path of great historical tradition that allowed the pilgrims to go from Barcelona to Montserrat and Xatos groups to the hermitage of Sant Muç, where we arrive to by taking the first crossing we find to the left.

Before the hermitage often burn the candles that those who want to thank something to the saint turned on. We are back again to the GR and we take the track that goes to the right of the GR. This shortcut crosses the torrent of Can Serra, after which there is a crossroads. We take the one on the left, which follows a firewall, until we reach a tunnel that allows us to cross the highway below. The road turns and runs parallel to the highway. To the left it goes the path to the masia Can Fonollet, which also has a small hermitage. Just before we reach the railroad tracks, we take to the right the road running parallel to the tracks and that passes through the highway again. The road gets a little away of the route of the railway and passes through the torrent of Can Pòlit. We find a crossroads where we leave the path we were following, and that goes straight ahead, and we take the one on the left, that faces the city of Rubí. A small tunnel allows us to go through below the railway track and leads us to a paved street that, to the right, brings us back to the castle.

The Castle: the castle of Rubí stands on a hill in the western part of the town of Rubí and to the other side of the river. It has had several functions over the years. In the 13th and 14th centuries the castle defended Rubí against bandits and foreign armies. In the 15th century it became an aristocratic residence without feudal jurisdiction in the hands of the family of the Torrelles, very much linked to the naval and military tradition. Finally, in the 16th century, it became a house of farmers, function that has lasted until well into the 20th century.

Hermitage of Sant Muç: He is a saint of the orthodox church and it seems to be that its worship came to our country in Visigothic times. This hermitage is famous for the pilgrimages of the Xatos groups, from the nineteenth century Barcelona, during the celebrations of the Easter of Resurrection. The oldest documentary reference of the hermitage is 1307. However, the majority of the visible items dates from the 18th century. Also, the presbytery was built at this time, from which they also date back the damaged paintings of the interior.

The hermitage of Sant Muç has suitable play areas and picnic.

From Terrassa and Barcelona with the Ferrocarriles de la Generalitat

A historical chapel where the famous “Festa dels Xatos” takes place every year. 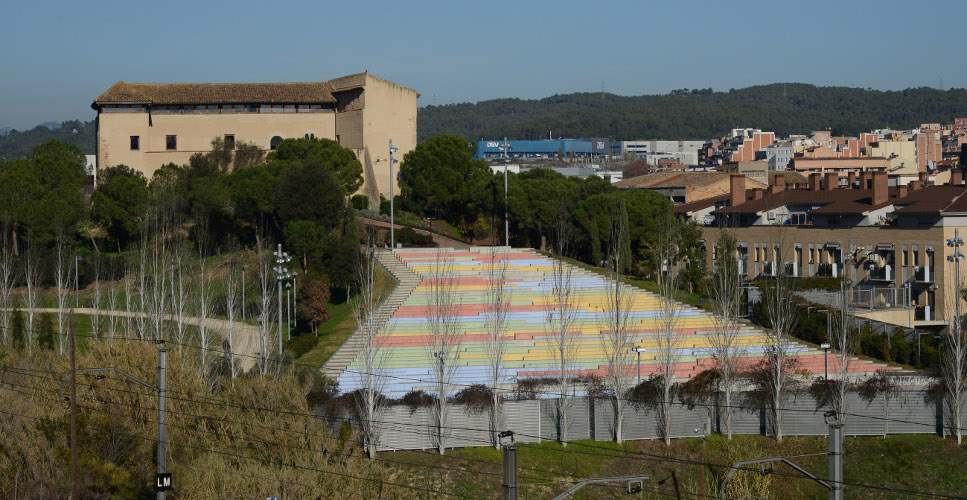 The best way to move from the prehistory to the present days of Rubí.